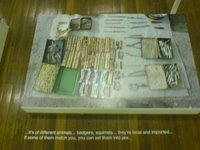 Yelena Vorobyeva and Viktor Vorobyev at Sydney College of the Arts

This installation consisted of a series of photos and objects from Kazakstan in the 1990s. Each photo was a snippet from the bazaars where people (mainly pensioners) would sell things from their homes in order to survive. The motley collections of household contents are shown with a quote from the sellers and a item from each that the artists purchased. The small collections speak eloquently of poverty amongst the elderly and the struggle to survive hard times. The goods are spread out on bits of cardboard and cloth, in some cases over the snow-covered ground. Some of the objects were the sort of things that would be considered worthless in more affluent countries - such as old bras, random bits of crockery and used stuffed toys. Items from the Soviet era are intermingled with cheap Chinese goods in a sort of historical pastiche of changing political and economic systems washing over the area. One struck me in particular - a selection of teeth from various animals, which the seller recommends setting into one's jaw if they match: do-it-yourself false teeth for those without access to dentists. A sobering exhibit that brings into sharp relief the comparative affluence and comfortable circumstances of it's intended audiences.

(Apologies for the poor photos, have had to resort to using phone camera for now due to laptop problems)

John Reynolds at the Art Gallery of New South Wales

My final comment on the Sydney Biennale is reserved for New Zealander John Reynolds 'Cloud', installed at the Art Gallery of New South Wales. The quirky 'New Zealandisms' that make up the work are taken from Harry Orsman's Dictionary of New Zealand English. The words are drawn in silver on a large number of small white canvases spread across the walls of the main foyer of the gallery - a long white 'cloud' of little canvases and words. Being a New Zealander it was a gentle and whimsical reminder of home. I wondered what people unfamiliar with the terms would make of it. The happy convergence of art and language makes for an interesting installation.

The Sydney Biennale has been an interesting and diverse exploration of unfamiliar and familiar artists. I have only managed to catch a small cross-section of the many works on offer, but I am already looking forward to experiencing it again in the future.
Posted by Celeste at 5:18 am No comments: 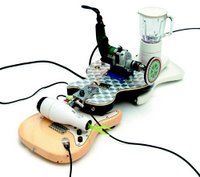 On Sunday I took a little time out from the extraordinary sunshine outside to have a look at what the Sydney Biennale had brought to Artspace in Woolloomooloo.

Tokyo artist Unjino Muneteru takes ordinary objects such as a hairdryer, juicers, an old wooden-housed radio, lamps and even a 1984 Ford Falcon and hooks them up to turntables to create music. The piece is entitled 'The Rotators." According to the little brochure accompanying the Biennale, "The work is based on the fact that most electronically-controlled products function/operate through rotation." (p.25) The turntables in this installation were playing records incised with pencil ends, which in turn triggered various other sound and lighting effects amongst the objects. The whole effect is a bit like what you would imagine might happen if the ordinary household objects that surround us came alive when we weren't around. A bit like an artist's Toy Story. It is a slightly surreal installation - the 'music' a vaguely hypnotic collection of simple rhythms and sounds. My companion noted the parallel with other works in the same vein - such as the group "From Scratch" which also used everyday and unlikely things (including natural materials) to create unusual sound performances. (see http://www.sonicsfromscratch.co.nz/fromscratch.php) Music and sound intersecting with 'trash art' or art that incorporates found objects is alive and well it seems in the work of Unjino.

There are a couple of quirky pieces by Jose Damasceno on display which also incorporate found objects, and a series of photographs from France by Finnish artist Elina Brotherus.

The video work of Tacita Dean is a little less fathomable and accessible to the audience. Tacita Dean's video piece prompted frustration from a viewer nearby who exclaimed, "if they could just provide some explanations!" Encountering a work such as this for the first time without any idea as to the background of the artist and their intentions in creating the work is somewhat bewildering. One has to ask the question - if the work fails to communicate something to viewers without an explanation handy then is it failing on a fundamental level? Video and performance art in particular often suffers from this lack of engagement and ability to communicate with a wider audience.

Here is what the Artspace website had to say about the work by Tacita Dean:

"British-born, Germany-based artist Tacita Dean will exhibit her moving film Boots, 2003. Boots is filmed in the Casa de Serralves, Porto, Portugal. Dean asked a family friend, the architect Robert Steane, affectionately known as ‘Boots’, to wander through the rooms of the Casa. The film is made in three versions of 20 minutes duration in English, French and German. Exhibited separately, each version shows ‘Boots’ entering a different façade and, as if inhabited by the memory of the space, speaks to the passing of human lives and the aspirations they embodied".

Well I think I will leave the explanation at that juncture and perhaps go delving into the problems of performance and video art in more detail on less sunny day!
Posted by Celeste at 9:37 pm No comments: 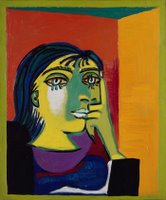 Currently on show at the National Gallery of Victoria, Melbourne.

I was fortunate enough to catch this hefty and interesting exhibition whilst in Melbourne recently. It features works by Picasso and his lover of ten years, surrealist photographer Dora Maar. Their relationship spawned a mass of works on both sides. Dora Maar's features inspired some of the best known Picasso works including the National Gallery of Victoria's "Weeping Woman."

The exhibition as a whole left me with a lasting impression of confidence and surety. There is a power to these artworks which is undiminished by time or by imitation. The range of media employed is quite expansive and both artists are were clearly unafraid to experiment with new techniques. Of particular interest to me were the series of photographs by Dora Maar showing the progress of Guernica as Picasso painted it. One is privy to changes and alterations in the structure of the composition, a process usually denied to the viewer. There are also some unusual works in which Picasso portrays himself as a Minotaur and Dora in various guises, including a winged sphinx. One gets a sense of an intense, emotional and intellectual love affair between two very complicated and unusual artists.

Also compelling are the works created during the war period. Sombre greys, browns and black tones predominate. A bronze skull and still-life pieces reek of foreboding. The love celebrated in the earlier works seems to crumble into despair and neglect. According to the exhibition information, after the relationship ended Dora became a recluse in her Paris apartment with the relics of her past. It is these records and objects which comprise much of this show. It seems a sad and lonely end to what was an inspiring and productive love affair.

"Every act of creation is first an act of destruction" - Picasso
Posted by Celeste at 1:52 am No comments: