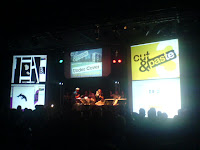 Cut and paste is the graphic design equivalent of a dance-off. Contestants have 15 minutes to create a static visual piece based on a given theme. Sponsored by Wacom (amongst others) it is a chance for contestants to win the latest pricey new design technology, such as the new Cintiq. Last night I went along to the Sydney version of this worldwide event.

I was hoping to see some design mavericks who would make me feel somewhat inferior with their impressive technical and creative skills. But whilst the quality of the contestants was obviously very high in their respective areas the results very generally a bit disappointing. The weakness lay often in the initial ideas which generally were not terribly strong. The set themes did not help, especially the final one - "to be popular at parties" with the added condition "your canvas is an awning." So very Sydney.

To be fair I think the structure of the contest favoured cartoonists and illustrators who can very quickly draw a fairly simple concept. There was very little use of typography and although the use of the technology was one of the criteria they were judged on some of the contestants did not make much use of the software capabilities. The different approaches were quite interesting - the play-dough piece seemed to be popular - and did highlight diverse approaches to design.

Style is influenced to some degree by the tools available and there is plenty of evidence of this in current design trends. The interesting thing about the new technology is that it does seem to favour traditional drawing skills. At last one can simply draw on a screen as though one is drawing on paper and the result is digitised instantly.

Judging by the large numbers who attended Sydney could use a few more events focusing on design. It does seem that the audience is somewhat starved of the chance to see design and in this case other designers at work. Modern graphic design is a product of it's time and the fast-paced and transient nature of the type of work created did seem to echo the current urban cultural soup.

http://www.cutandpaste.com/events
Posted by Celeste at 3:00 pm No comments: