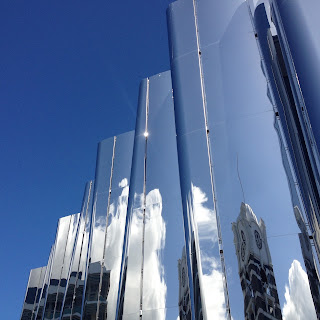 This summer I took a road trip and visited two regional galleries in New Zealand. The first stop was the Len Lye Center and Govett-Brewster Gallery in New Plymouth. The new Len Lye Centre opened in 2015 and has attracted alot of attention since. It was interesting to visit a regional gallery that has managed to make such a large impact beyond its’ immediate region. Like all good aspiring art galleries, the architecture by Patterson Associates is avant garde, unusual and makes a bold statement. 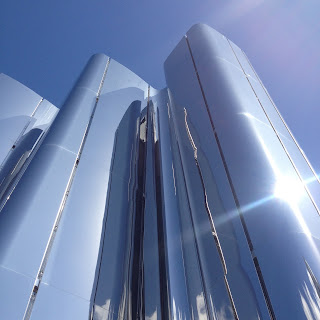 The shiny and highly reflective marine grade stainless steel surface of the building continues along two curved, rippling facades. The repeating forms reflected in these reminded me of some of the Len Lye films screened inside with their jumping rhythmic film frames. The striking facade is an excellent counterpoint to the large, stainless steel kinetic sculptures exhibited inside. Whilst photographing the facade a couple of women walked past and one remarked “ I hate that building, it looks disgusting.” Regardless of some negative opinions it seems likely this new building will be hugely beneficial in developing cultural tourism to the region. Whilst I was there children were having a great time peering at their distorted images in the mirror-like surface - a facade for the selfie generation perhaps? 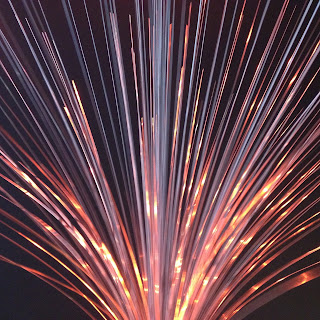 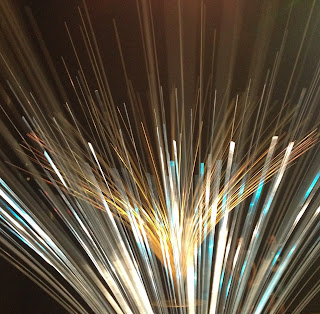 The Len Lye exhibition inside the building gives one a good introduction to his work and left me wanting to see more. I liked the way the steel fountains create an ever-changing series of forms as the steel rods move and shimmy. It was a delight to photograph and observe these, they reminded me of the (somewhat static!) metallic lines in some of my earlier paintings. 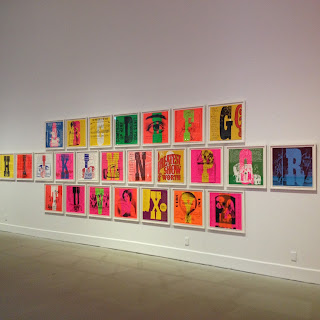 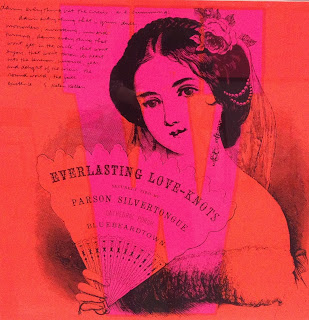 I was excited to come across an exhibition in the Govett-Brewster section of work by an artist I was not previously familar with. Sister Corita was a Roman Catholic nun (1918-1986) who produced and taught art in Los Angeles in the 1960’s and later in Boston. Her screenprints look extraordinarly modern and fresh, like they were produced yesterday, a reminder of how much we owe to the recent past. She used elements of popular culture to produce bright and thoughtful works. These often have a political undercurrent. I found her work fascinating and the inclusion of contemporary record covers and some posters from New Zealand by Wellington Media Collective made for an interesting show.
More information can be found here, http://www.govettbrewster.com/exhibitions/sister-coritas-summer-of-love

If you miss seeing this show at the Govett-Brewster it will be travelling to the City Gallery, Wellington later this year. http://citygallery.org.nz/exhibitions/sister-coritas-summer-love
Posted by Celeste at 7:17 pm No comments: 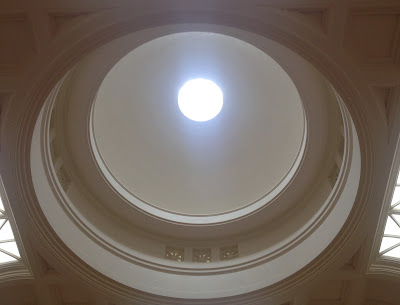 Last week I was fortunate to have the opportunity to visit the Sarjeant Gallery Te Whare o Rehua Whanganui with Senior Curator Greg Anderson.

The beautiful original building from 1919 sits in a prominent position near the town centre, with impressive views from front and back. Sightlines were obviously a big consideration in the design and planned redevelopment will preserve and enhance these. Prior to shifting the collection out of the gallery a section of the masonry ceiling fell out, grazing the marble bust of gallery founder Henry Sarjeant and revealing further damage underneath. It was obvious that the time had come to take action. Rated at only 5% of the current new building code, the original building is in dire need of earthquake strengthening and basic restoration, with various types of damage visible throughout the structure. Previous collection storage in the basement was also very inadequate. Luckily the central dome (pictured) remains intact although that too will require a degree of strengthening work.

The gallery has an interesting and significant art collection of over 8000 items. I caught a glimpse of some of these works in storage ranging from historic European painters through to prominent New Zealand artists. Protecting it has been a challenge given the state of the building - no environmental or lighting control. Just getting access to items was a major issue in the confined spaces of the old excavated basement below the original building. 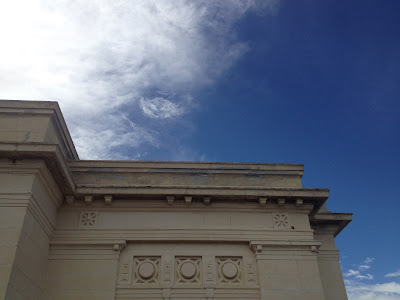 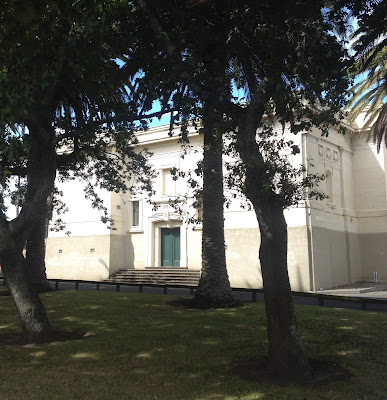 In preparation for redevelopment and to mitigate earthquake risk the collection has been moved and a temporary location for the gallery at 38 Taupo Quay has opened. Fortunately the art collection was safe from recent floods which damaged much of this area of Whanganui, although the gallery space of the temporary building did have to be repaired. Moving the collection has been a huge but rewarding task. Over two thousand items with little or no documentation were uncovered during the process and inventoried. Some of these items will no doubt prove interesting to art history students of the future and will provide the gallery with previously unseen material for future exhibitions.

When the redevelopment occurs a new wing will be added to increase exhibition, education, amenities and storage space for the art collection. The design and position of the new wing behind the original building will ensure that the historic old building will still be the main feature visible from the town centre. View the flythrough here: http://sarjeant.org.nz/flythrough/ 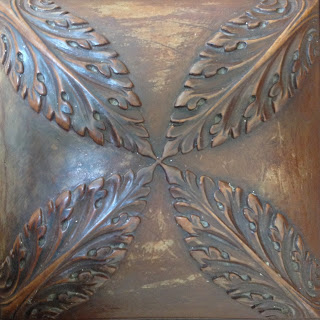 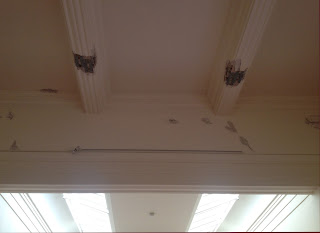 At the Sarjeant’s glass and object gallery located above the Whanganui iSite at 31 Taupo Quay, there are some intriguing works currently on view. Above the Whanganui tourism site are cast glass works by Emma Camden. These large, weighty forms reminiscent of architecture are really beautiful. Whanganui has a strong tradition in this area and it will be interesting to see more works in glass in future exhibitions. 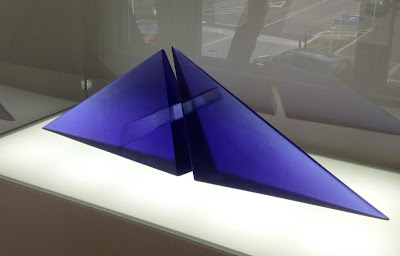 In the main gallery at 38 Taupo Quay there are collection works by Vivian Smith and Mary Green, artists who taught at Whanganui Technical College. The William Morris influenced floral designs are particularly appealing. Contemporary works on display include portraits of opera singers participating in the New Zealand Opera School in Whanganui by Felicity Priest, and a large work entitled “The Horses Stayed Behind” by Cat Auburn. This work by Cat Auburn is made of a multitude of Victorian style rosettes created from donated horse and pony hair, each identifiable and spread across four large panels.
More information about this work can be found here:
http://www.artnews.co.nz/profile-winter-2015/
http://www.sarjeant.org.nz/site/pages/exhibitions/cat-auburn-the-horses-stayed-behind.php 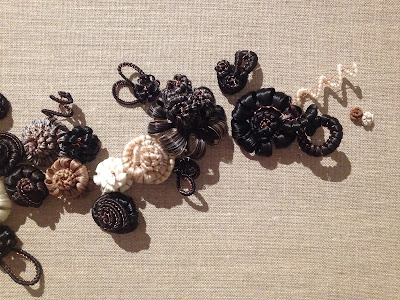 Securing the funding for the proposed redevelopment of the Sarjeant Gallery Te Whare o Rehua Whanganui has been an extremely challenging task and it is a testament to the perseverance and dedication of Greg Anderson and his team that a significant portion of the funding required has already been secured. A quote on the wall in the staff area (pictured above) gave me some sense of just how daunting it must have seemed at times given the setbacks and the scale of the tasks involved. 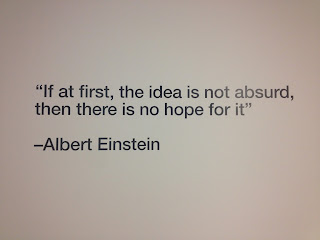 Some of the larger works requiring restoration need additional funding to carry this out and hopefully donors can be found for these. It will be very exciting to see the whole project finally go ahead and it will undoubtedly have a positive impact on the city, the region and New Zealand culture. It will be a real pleasure to see a vision fulfilled at the opening in 2019 of the restored gallery and new wing. 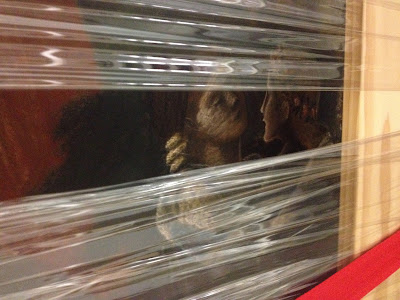 Above: A beautiful large work by Edward Burne-Jones under wraps whose frame is awaiting conservation.

Posted by Celeste at 8:30 pm No comments: